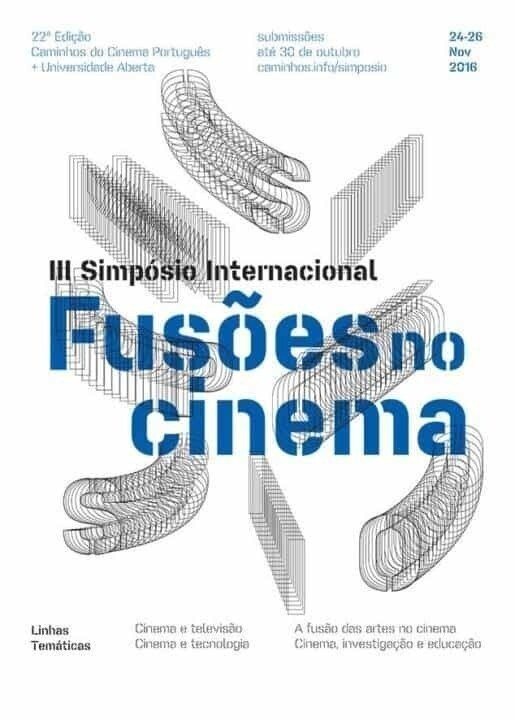 The 3rd International Symposium “Fusions in Cinema” will take place from the 24th to the 26th of November 2016, in Leiria.
This 3rd edition of the Symposium will be co-organized by Caminhos Film Festival and Mobile Unit Research on Local Studies (ELO) of Universidade Aberta. All proposals will undergo a peer review process, held in the form of blind review, in order to guarantee the fairness and impartiality of the assessment. The submitted and accepted papers for communication will be, afterwards, published in the minutes of the symposium in electronic format. The best works will be published in the Journal Linguagem do Cinema e do Audiovisual do Latec-UFRJ.

Teachers, researchers, guest speakers, experts and artists from different areas will analyze in this 3rd International Symposium, the current artistic and educational practices, the new roles of the different actors involved in today’s creative and operational dynamics of art, education and culture.

Caminhos Film Festival and Universidade Aberta invite you to submit communication proposals in Portuguese, English or Spanish, not exceeding 1500 characters (including spaces), in the following thematic lines of the Symposium (which would be open to others):

Line 2 – Cinema and Technology
The technological progress and the way Cinema reaches the Spectator: – Architecture; – Subtitling, dubbing and audio description; – The New technologies, Internet and cinema; – The supports, formats and new media; – Cinema and Games or Cinema and Digital Games.

Line 4 – Cinema and Television
Theoretical approaches on audiovisual production in general, including all genres and distribution platforms, framing it in a national and international contemporary context; The analysis of the relationship between achievement and production of cinema and television content; Film and Television worlds, parallel or interconnected;

Sign Up Call for Papers
Communication proposals to be submitted should include the definition and delimitation of the research object of study; the scientific relevance and merit of the proposal; the objectives and research methodology/analysis used; primary references; and three to five keywords. Each communication proposed shall also be submitted with a biography of the author(s) with up to 750 characters (including spaces).

The final article should be submitted by e-mail to: [email protected]